Extra Special/Strong Bitter. ESBs are essentially more aggressive and more balanced Bitters. Low carbonation. Malts tend to be more pronounced, often toasty and fruity. And despite "bitter" being in its name, ESBs are not really all that bitter.

The Belgian Dubbel is a rich malty beer with some spicy / phenolic and mild alcoholic characteristics. Not as much fruitiness as the Belgian Strong Dark Ale but some dark fruit aromas and flavors may be present.

Generally dark and sweeter in flavour, malts contain hints of caramel, toffee, and nuts. They can be light to full bodied

Saison is a pale ale that is generally around 7% abv, highly carbonated, fruity, spicy

Light and easy to drink with very little aftertaste. Wheat provides a soft character to beer and is sometimes hazy or cloudy with a touch of spice notes

Germany's answer to the British pale ale. Light to medium in body with a very pale color, hop bitterness is medium to slightly assertive. A somewhat vinous (grape-y from malts) and dry flavor make up the rest.

Red ales can either be red or light brown in colour. They are moderate to heavy in flavour and contain hints of caramel that is offset by the predominant hop characteristic of the beer.

Typically light in flavour with a refreshing lime taste. The intensity of the lime can differ from very subtle to strong

A hoppier version of pale ale. Originally brewed in England with extra hops to survive the journey to British troops stationed in India.

This is a broad grouping that can describe any beer over 7% ABV. Strong beers are typically dark in colour, some are almost black. Different styles can include old ales, double IPAs, and barleywines.

Blonde ales are very pale in colour and tend to be clear, crisp, and dry, with low-to-medium bitterness and aroma from hops and some sweetness from malt.

Made with neutral and hard water. Tend to be golden in colour with a dry, crisp, and somewhat bitter flavour. Pilsner stands out from other lagers due to its more distinctive hop taste.

Brewed with top fermenting yeast at cellar temperature, ales are fuller-bodied, with nuances of fruit or spice and a pleasantly hoppy finish. Generally robust and complex with a variety of fruit and malt aromas, ales come in many varieties. They could include Bitters, Milds, Abbey Ales, Pale Ales, Nut Browns, etc.

Ales are often darker than lagers, ranging from rich gold to reddish amber. Top fermenting, and more hops in the wort gives these beers a distinctive fruitfulness, acidity and pleasantly bitter seasoning. Ales have a more assertive, individual personality than lager, though their alcoholic strength is the same.

Dark ale is a British type beer, combining hops, yeast and a blend of malts. It's a medium chestnut brown colour, with a delicate fruity smell and robust, malty character.

Dark amber or brown in colour, brown ale have evidence of caramel and chocolate flavours and may have a slight citrus accent or be strong, malty or nutty, depending on the area of brewing. 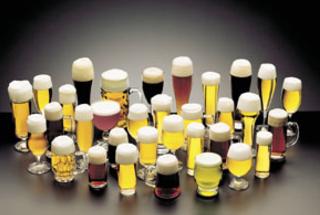 A very versatile beer, Amber beers are full bodied malt aromas with hints of caramel, these beers could be either lager or ale.

Wheat beer is beer that is brewed with a large proportion of wheat relative to the amount of malted barley; it is usually top-fermented. The two main varieties are Weissbier and Witbier, with minor types such as lambic, Berliner Weisse and gosealso produced.

Strong lager of German origin, more of a robust malt character than a  typical lager, with a dark amber to brown hue. Several sub-types exist, most are only lightly hopped.

Most fruit beers are ales however, they typically do not carry an ale character. In order to allow for the fruit flavor to come through nicely, the malt’s flavor is not dominant and there is a low bitterness level to the beer

Gose is a top-fermented beer that originated in Goslar, Germany. It is brewed with at least 50% of the grain bill being malted wheat. Dominant flavours in gose include a lemon tartness, an herbal characteristic, and a strong saltiness

The name "Tripel" actually stems from part of the brewing process, in which brewers use up to three times the amount of malt than a standard Trappist "Simple." Traditionally, Tripels are bright yellow to gold in color, which is a shade or two darker than the average Pilsener.

Pale ale has a fruity, copper-coloured styler. It originiated from England. Pale ales are robust beers that can be enjoyed with strongly spiced food

A full-bodied beer with a creamy texture and copper colour. Honey beers are slightly sweet with hints of caramel.

With imports, craft beer and micro brews growing in availablity at a rapid rate, it has become easier than ever to try different types and styles. So we put together and ever expanding guide to help you navigate the world of beer.

First developed in the UK, Golden ales are straw coloured with a slight hint of citrus and vanilla. The beer can sometimes contain spicier flavours.

Any beer that contains no higher than 5 percent ABV, featuring a balance between malt and hop characters and, typically, a clean finish - a combination of which creates a beer with high drinkability.

Smoked beer is a type of beer with a distinctive smoke flavour imparted by using malted barley dried over an open flame.

Typically a deep copper to brown in color and posses a higher level of unfermentable sugars which create a rich mouthfeel and malty flavors and aromas. Overall hop character is low, light floral or herbal, allowing its signature malt profile to be the highlight. Smoky characters are also common.

There’s very little distinction between a Porter and a Stout, but they do have their differences.

Porter is a dark, almost black, fruity-dry, top fermenting style. An ale, porter is brewed with a combination of roasted malt to impart flavour, colour and aroma. Stout is also a black, roast brew made by top fermentation.

Stout, not as sweet to the taste, features a rich, creamy head and is flavoured and coloured by barley. Stouts often use a portion of unmalted roasted barley to develop a dark, slightly astringent, coffee-like character

Style of American beer, of which examples are often light in color and are well attenuated. A very mild, sweetish, golden style of ale.

A once-outlawed German beer style that slipped under the rules of the German Beer Purity Law with the addition of oats, honey and molasses. This style also used a powerslam of hops and is fermented with altbier yeast.

Most fruit beers are ales however, they typically do not carry an ale character. In order to allow for the fruit flavor to come through nicely, the malt’s flavor is not dominant and there is a low bitterness level to the beer

Lager originates from the German word lagern which means 'to store' – it refers to the method of storing it for several months in near-freezing temperatures. Crisp and refreshing with a smooth finish from longer aging, lagers are the world's most popular beer (this includes pilseners).

A lager, which can range from sweet to bitter and pale to black, is usually used to describe bottom-fermented brews of Dutch, German, and Czech styles. Most, however, are a pale to medium colour, have high carbonation, and a medium to high hop flavor.